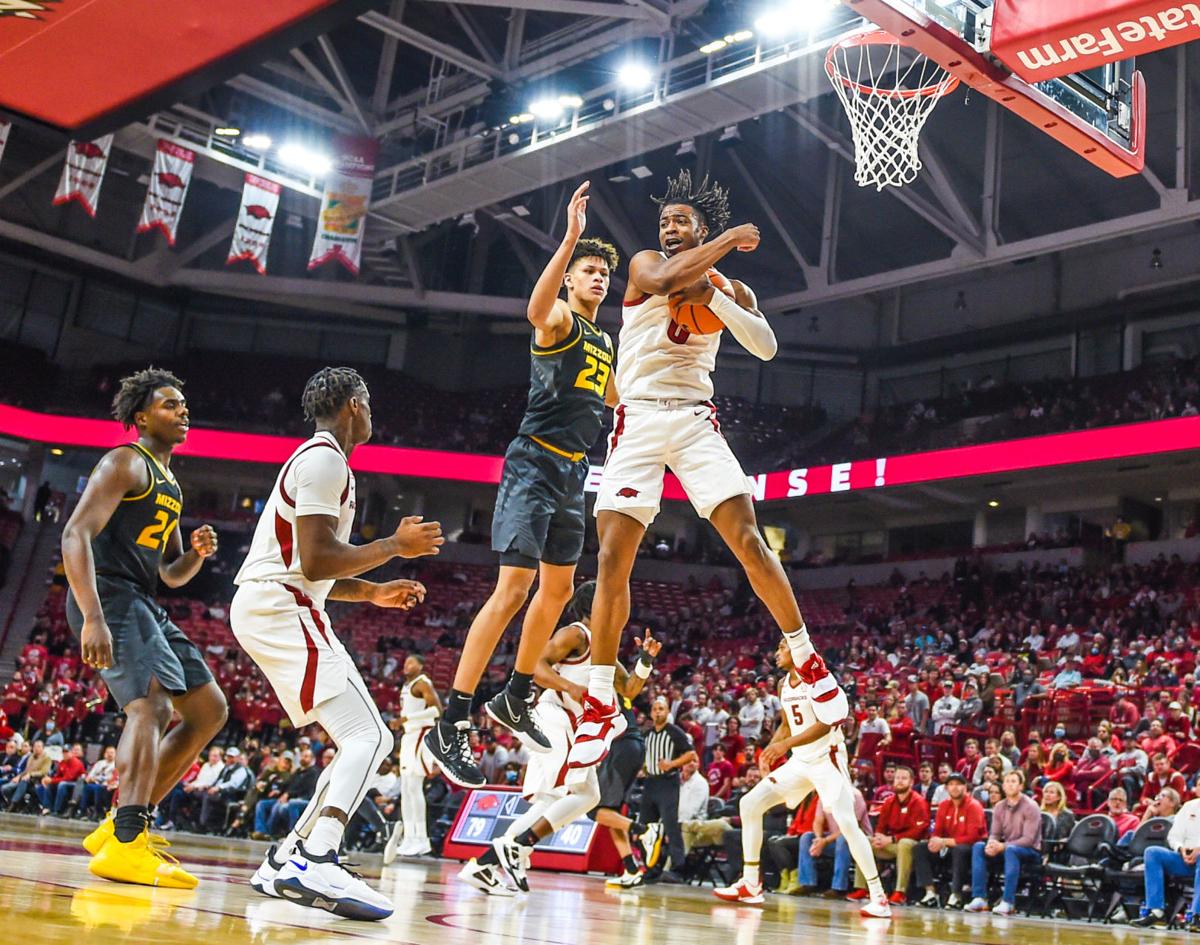 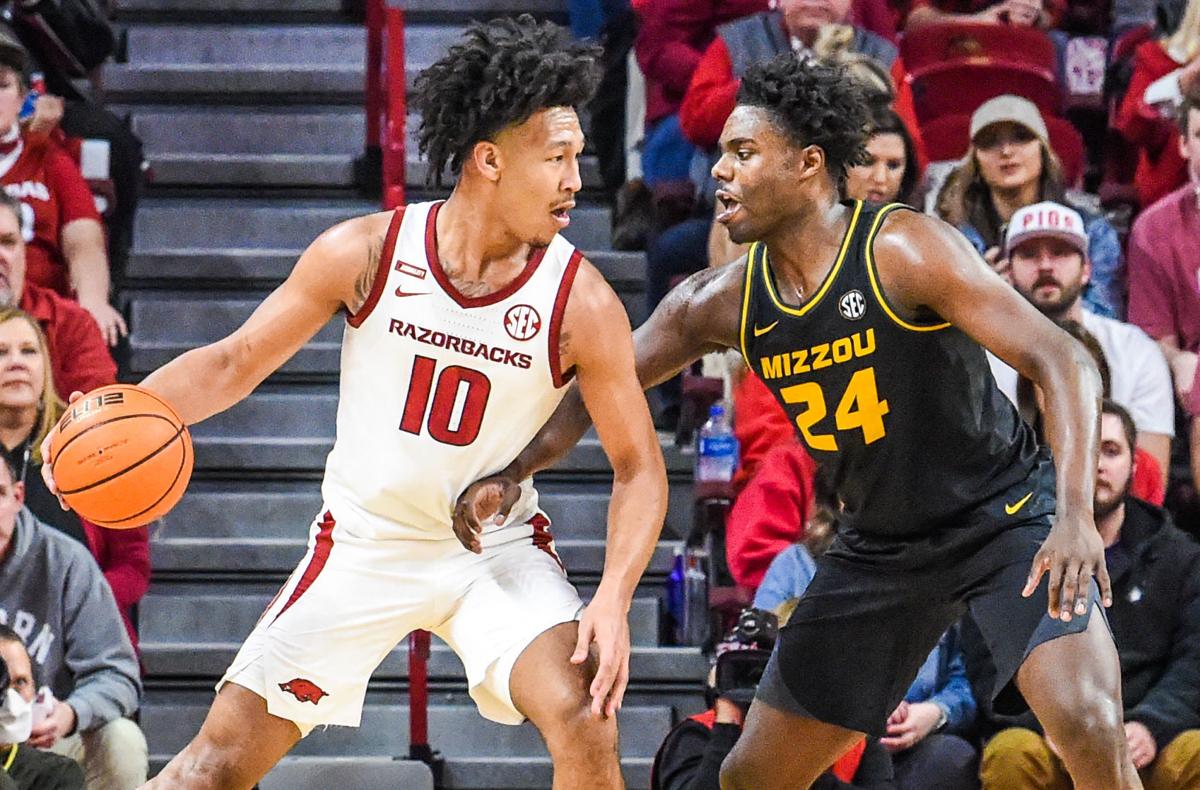 FAYETTEVILLE - Embarrassed by an 0-3 SEC start, including a home loss to Vanderbilt, and alarmed that Missouri last Saturday upset then 15th-ranked Alabama, the Arkansas Razorbacks with their best shot walloped Mizzou Wednesday night at Walton Arena.

“I can’t remember a league game in any league I’ve ever coached where a team played so well for 40 minutes, ”Musselman said.

The Razorbacks face a more formidable group of Tigers in LSU’s Tigers in Baton Rouge than the 7-8, 1-2 Mizzou Tigers they tamed in Fayetteville.

But pregame, with the Hogs losing 5 of their last 6 and Mizzou’s Kobe Brown scoring 30 leading the stunner over Alabama, Mizzou’s Tigers had Arkansas’ attention start to finish.

Arkansas blew them away opening up 7-0 and answering Mizzou’s first basket, a three, with a 19-0 run.

At half, a Razorbacks squad done in by turnovers in its three previous SEC games had only committed two miscues to Mizzou’s 11, outshot Mizzou from the field, 17 of 33 to 3 of 25, outrebounded Mizzou, 23-17, and by a wider margin early, and held Kobe Brown to four points for the half and six for the game.

Almost as amazing as their first half, the Hogs never let up in the second half.

“Especially that first half of only giving up three field goals. I can’t remember coaching a game where defensively every field goal attempt was challenged like it was tonight. Obviously we played better than we have all year.”

“Tough night,” Martin said. “I think it’s safe to say that I didn’t see it coming but give those guys credit playing well from start to finish. They had a unique lineup for them. It was really more threes and fours (small forwards and power forwards). They were able to set a physical tone and we couldn’t recover from that. We didn’t see it coming.”

Or that Notae would be a one-man backcourt disruptor until guard Devo Davis off the bench joined him.

“You could see the first seven minutes that Notae did a good job pressuring (Mizzou guard) Boogie Coleman,” Martin said. “He had him walking the ball up the floor so they could extend their defense.”

“I thought defensively it gave us an identity as well as rebounding the basketball,” Musselman said. “We guarded the three (Mizzou was 2 of 16 compared to Vandy and Texas A&M’s 10 of 25 and 8 of 19 on three.”

Sophomore guard Davis, displaced from starting with the big lineup, excelled off the bench. Davis finished with 15 points, six rebounds, three steals and four assists against one turnover.

Davis loved every minute, including not starting as Arkansas snapped its SEC skid.

“I love the starting lineup we went with,” Jacksonville native Davis said., “I think it helped us out a lot. You've got Trey and you've got Kamani in there out-hustling the entire Missouri starting five, which is amazing for us. You saw on the bench. We had a lot of energy. We were excited the entire game."

“We shrunk the floor,” Musselman said of the strategy vs. Brown. “We gave help. Tried to let him see a wall. Didn't want him to get anything in transition. Just did not want him to get any easy looks at all. That was, in a nutshell, it was basically just shrinking the floor to our best abilities and making sure we had the elbows and boxes covered whenever he had the ball in his hands.”

Brown couldn’t score much with Mizzou turning it over 23 times to Arkansas’ eight and being outscored 26-4 on miscues.

Offensively and defensively the goal was “play the right way,” Wade said. “We have to have a swag on defense. We’ve got to be the tougher team. We were tonight and it helped us a lot.”

Other than Johnson’s ankle injury the night couldn’t have gone better for Arkansas.

“It’s pretty swollen and it’s in a boot” Musselman said.

Turns out Wednesday’s win over Missouri not only snapped Arkansas’ 0-3 SEC skid but became a proper sendoff to surgery for Arkansas Coach Eric Musselman.

Following the 87-43 mauling of Mizzou Wednesday night at Walton Arena, Musselman Thursday morning underwent what was described in a UA press release as “successful surgery to repair a full tear of the supraspinatus tendon and partial tears to the infraspiniatus and subscapularis tendons in his left shoulder.”

Musselman, injured a couple of weeks ago in a collision with a player during practice, had hoped to postpone the surgery until postseason. The incessant pain, particularly when trying to sleep, caused him to reconsider.

“The goal was to use daily physical therapy and treatment as well as a steroid injection to delay the surgery as many weeks as we could,” orthopedist Dr. Wesley Cox was quoted. “None of which have offered any significant improvement. At this time, surgery to repair the tears was necessary due to the amount of pain and instability he was experiencing and to mitigate the risk for significant complications in the future. Coach Musselman is expected to do very well and ultimately make a full recovery.”

Musselman apparently hopes to coach the Razorbacks’ Jan. 22 rematch with Texas A&M at Walton Arena but Thursday’s press release noted the coach “will miss at least two games.” So his status will be reevaluated next midweek.

Smart, in his first year at Arkansas but with a longtime association with Musselman playing for him in the pro minor leagues with the Florida Beachdogs and Rapid City Thrillers and assisting him as a coach on Musselman’s Golden State Warriors NBA staff, coached 22 years in pro ball including NBA head coaching stops at Golden State, Cleveland and Sacramento. He reunited with Musselman at Arkansas to start his collegiate coaching career.

“He (Musselman) shared that with me the day before yesterday that he was going to finally go get his surgery,” Smart said Thursday. “We had talked about it for a while as far as him getting his surgery. He shared with me that I was going to coach the team while he was away.”

“I've been able to do this several times in my coaching career,” Smart said. “When I was (assistant) coaching at Golden State, I coached 17 games with Coach (Don) Nelson (out with pneumonia) there. So, it's not a new thing. Plus, I've been around Coach Muss for so long and have a good understanding of his approach. I shared with the team that I'm going to do everything I can to stay close to the vest with how we've been doing things, but I've got to coach in my style and my personality. I talked with Coach about that and he said just do what you need to do and keep preparing this team to get ready to play a game."

As a Baton Rouge native, though never playing for LSU, Smart already was fired up coming home as an assistant coach for the first time much less now running the show.

“We kind of all knew something was up when he was walking around practice with a heating pad or ice pack on his shoulder while just coaching with one arm down and one arm up pointing,” Williams said.

He expressed faith in Smart and assistants Gus Argenal and Clay Moser.

“Last night’s game was really big for us and we want to keep it rolling,” Williams said. “Coach Smart’s brains, knowledge of the game and being able to read things. All our team has confidence in him and the staff. We all have confidence he is going to lead us in the direction we want to go.”

Johnson provided four rebounds and four points in nine first-half minutes against Mizzou before watching the rest of the game with a boot on his just sprained ankle.

“Kamani is still being evaluated,” Smart said. “You’ve got to see how he responds to traveling with his ankle and things like that. But our training staff is doing an incredible job to get him up and hopefully we have a chance for him to play in this game.”

The big lineup not only helped Arkansas on the boards but surprisingly with four bigs and one guard sliced the turnovers bedeviling the Hogs in their SEC losses at Mississippi State and at Texas A&M and home vs. Vanderbilt to just two for Wednesday’s first half that Arkansas led 49-15.

It was a more versatile lineup than you might believe, Williams said.

“I wouldn’t say we had four big guys in there,” Williams said. “Au’Diese is a 2-3 (off guard and small forward). Trey can play 3-4-5 (small forward, power forward and center) and Mani is a 4-5 and I wouldn’t consider myself a strictly 5-man. So I think we had a lot of smart players in the game and with one guard in the game I felt we slowed the game down a lot more and ran screens and moved the ball around and that contributed to us not having that many turnovers.”

With the LSU Tigers, the Hogs have entirely different Tigers by the tail in Baton Rouge than they had with Mizzou’s Tigers in Fayetteville.

Mizzou was coming off a stunning SEC home upset of then No. 15 Alabama but is only 7-8 overall and routinely been throttled on the road.

Coach Will Wade’s LSU Tigers stand 15-1 with victories over customary SEC powers Kentucky Tennessee and Florida and the lone loss at currently No. 4 Auburn.

Xavier Pinson, LSU’s point guard transferred from Mizzou, missed LSU’s victory at Florida this week with a knee injury and is deemed doubtful for Saturday.

Smart said a big key is continuing Wednesday’s success in cutting turnovers against an LSU team designed to turn teams over.

“On the defensive end because of their length and their athleticism they cover a lot of ground and they do a great job of switching and trying to flatten you out to make you have to play from out on the perimeter,” Smart said. ‘We have to be smart with the basketball, things we’ve been trying to do - take care of the turnovers.”