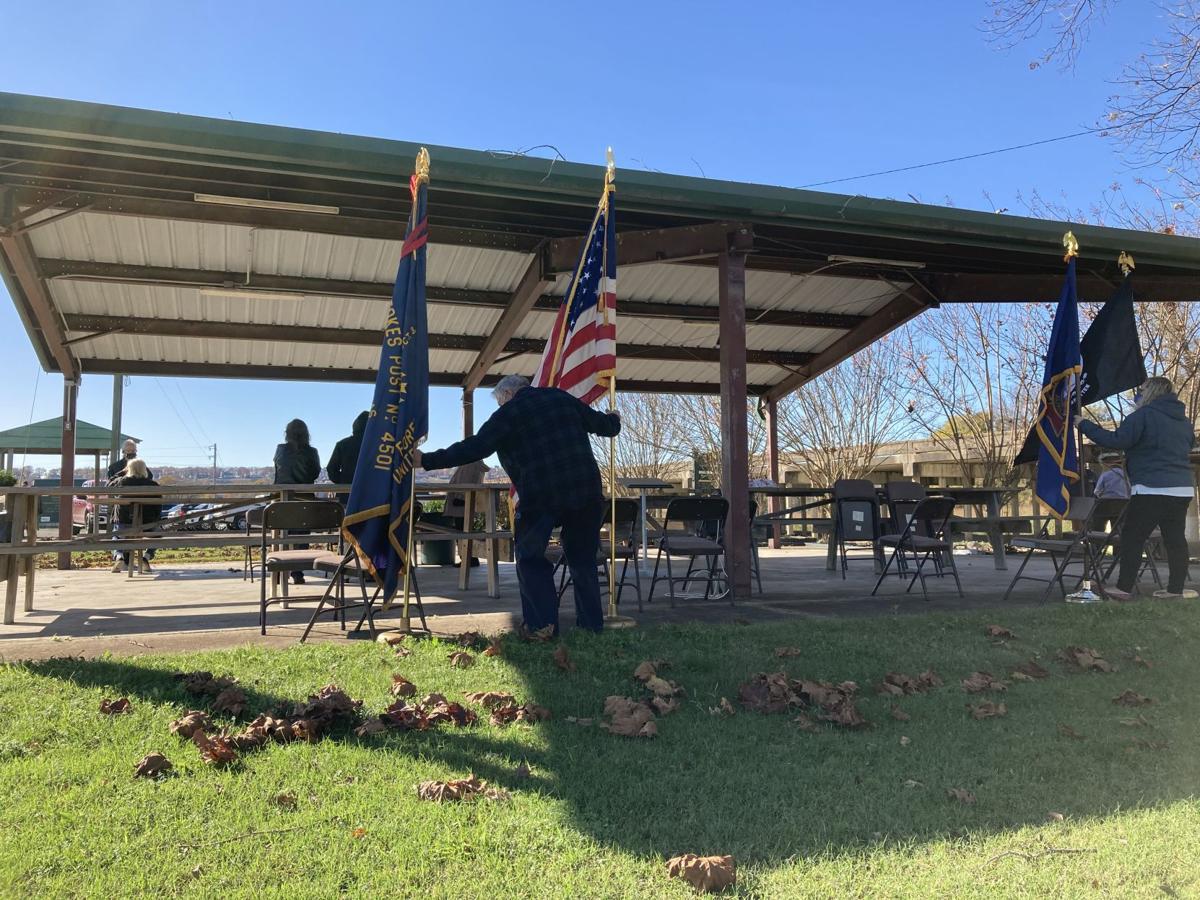 Flag poles get in formation for a Veterans Day Ceremony at Kennedy Park in Batesville. 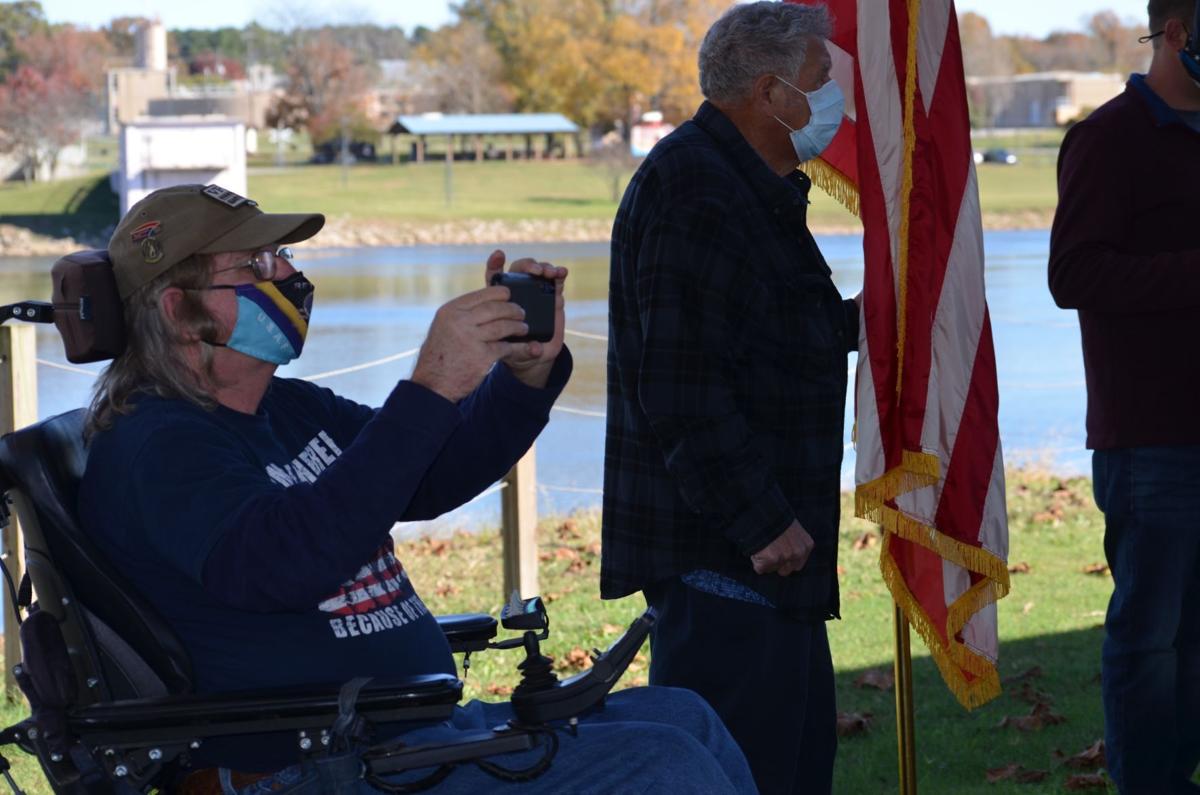 Flag poles get in formation for a Veterans Day Ceremony at Kennedy Park in Batesville.

Veterans Day dawned bright and clear in Independence County with a chilly north breeze. Not that it bothered the group of 50 veterans who gathered for ceremonies at Kennedy Park in Batesville. The ceremony began with a prayer by Larry Whipple, chaplain for Veterans of Foreign Wars Harry B. Stokes Post #4501, and Ellen Muskgrave sang America’s national anthem “The Star Spangled Banner.”

Members of VFW Post #4501 conducted an American flag folding ceremony, as VFW Auxiliary Treasurer Jana Patrick read aloud the meaning of each intricate fold. There was also an MIA/POW empty chair ceremony, along with memorial wreaths laying in the White River.

In his remarks, Smith thanked the group for their service.

“You are the bravest and best. Givers, in a society of takers,” Smith said.

Sturch gave impassioned remarks, relating the story of a civics teacher in Little Rock who removed the desks of her students. When they asked where the desks were, she asked a question back:

“What have you done to earn that desk?”

Students replied with all sorts of responses. Their grades, their athleticism, their hard work.

At the end of the school day, when outraged parents and the television cameras showed up, the teacher opened her classroom doors, and veterans carried in the desks, arranging them in tidy rows.

“They earned your desks,” the teacher said.

In reading Judge Griffin’s remarks to the group, Morrison announced the judge’s plans for creation of a veterans memorial garden.

“I have felt since coming into office that we need to recognize our veterans, both those fallen and living, and/or families of each for various conflicts of war. I felt the first war to recognize is World War I and progressively other conflicts through time and a space for those to likely come in future years. The biggest problem with beginning that process was space. We did not have a place of enough size to do this project,” Griffin said.

“When I discussed the drive-thru facility of the Bank of America campus, with the Assessor and Collector and the possibility to serve our citizens by offering drive-thru options, I also discussed the possibility of having a memorial garden recognizing our heroes of past wars and those to come. I see having a monument to law enforcement and firefighters as well. The space needed would be in the area between the two bank facilities, the main bank building and the drive thru facility. I appreciate the quorum court for supporting both of these ideas. These monuments could be viewed easily in this location and have sufficient room for all. Funding will be the next challenge and I hope to address civic groups to help with this. ‘A journey of a thousand miles begins with a single step.’ This is the first step of this journey,” Griffin said.

After the ceremony the group made their way across the White River to VFW Post #4501, on Chaney Dr., for a socially-distanced meal. Veteran Deanna Brown was there eating and fellowshipping with veterans. She trained at Fort Campbell, Ky. and served three tours in Iraq between 2004-06. She moved to Batesville in 2010. She currently serves the country with the USDA working in food safety inspection service in Independence County.

What would he want readers to know about Veterans Day?

“That I’m one,” Mitchell said flatly, before smiling and winking.

He’ll be turning 88 in a few weeks. His family moved to Batesville when he was an infant, just weeks after he was born in the Arkansas community of Sylamore. He spent three years as an Army infantryman during the Korean War.

“I left out of Seattle and flew to Tokyo. They sent me back on the slowest boat the Navy had, from Incheon to San Francisco, took weeks,” Mitchell said.

Rita Brooks is married to John Brooks, commander of the local post of the American Legion, located at 100 Legion Lane. She serves as chaplain for the post. She sews military themed masks, for a $1.50 donation to the legion.

“We’re still having karaoke, bingo and pool tournaments, but masks are required,” Brooks explained. She was sitting under a canopy in the outdoor area of VFW Post #4501. The outdoor area is pleasant. Fenced in, with patio furniture and a fire pit.

Back inside the post, James Patrick was visiting with other veterans. He serves as quartermaster for VFW Post #4501. He served five years as an aircraft mechanic with the Air Force.

“It’s an honor to be amongst my brothers and sisters in this room. No matter what they did, they fought together for the freedom of our country” Patrick said.

VFW Post #4501 currently has about 130 members. Multiple veterans mentioned two members who were absent from the ceremony and meal. The veterans age 101, and 103, are in nursing homes and unable to attend the ceremony because of COVID-19.