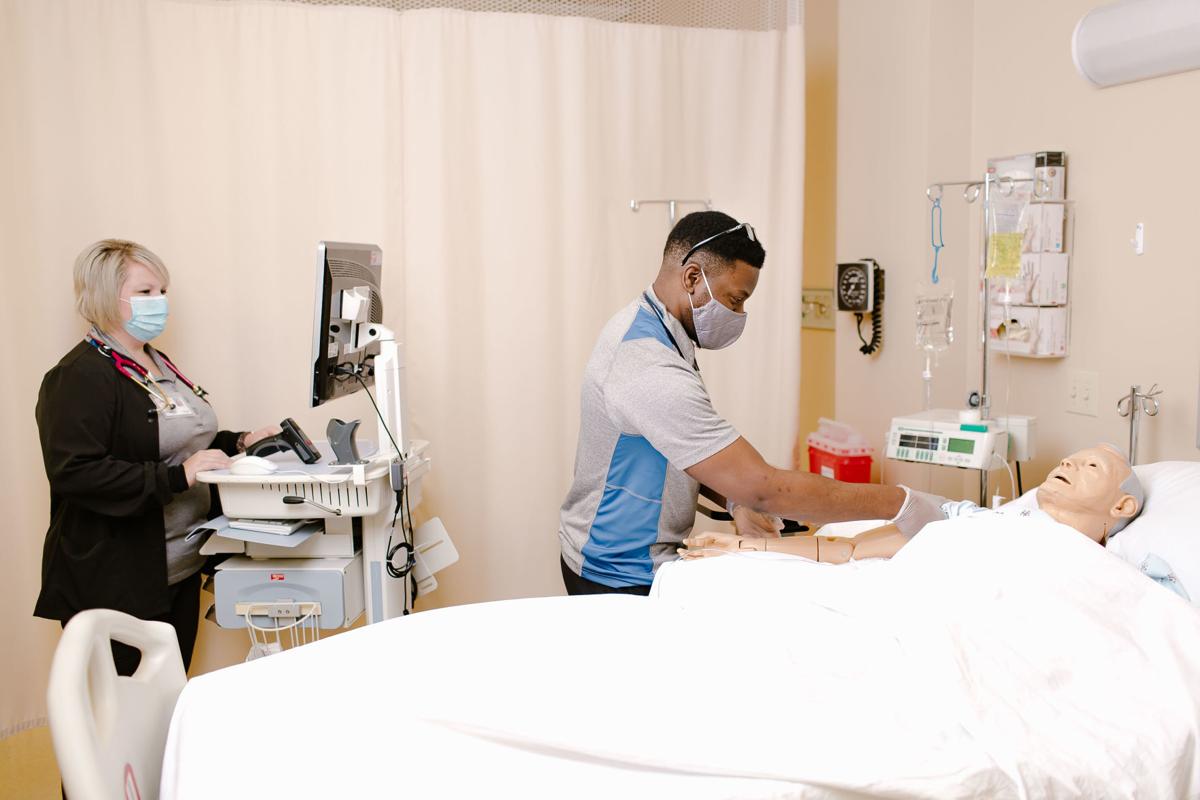 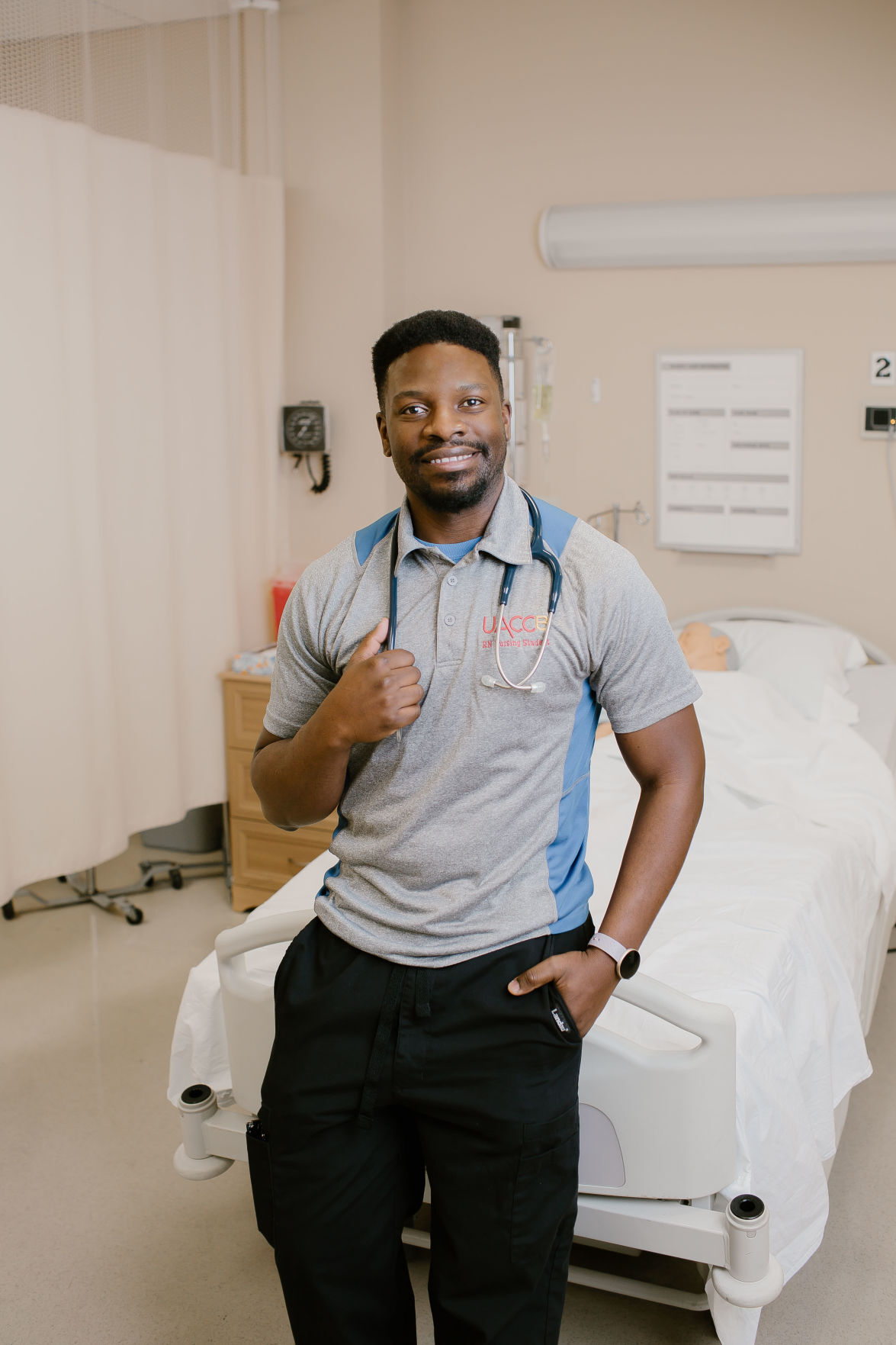 Jonathan Mhlanga anticipates graduating from the registered nursing program at UACCB this year.

Jonathan Mhlanga anticipates graduating from the registered nursing program at UACCB this year.

{Editor’s Note: In honor of Black History Month, the University of Arkansas Community College at Batesville would like to highlight some of its outstanding students and their successes. This is the third in a four-part series.]

When Jonathan Mhlanga arrived at the Dallas/Fort Worth International Airport in 2003, his only possessions were a suitcase full of clothes and $200 in his pocket. He was only 18 years old and had left his home in Zimbabwe to attend Harding University in Searcy on a student visa.

“A friend of my father’s picked me up, and we drove straight to Harding. I was scared at first. My first day I was placed in a dorm with a roommate. There were no blankets on the bed, so my first three days I slept on just the mattress with no blankets. Someone from the church donated some blankets for me to use,” Mhlanga recalled.

Mhlanga was born in Harare, the capital city of Zimbabwe. Growing up in Zimbabwe, Mhlanga attended Nhowe Mission School, a boarding school situated in a very rural area. He said about 90 percent of schools in Zimbabwe are boarding schools. Resources at the school were scarce. Mhlanga said students studied from outdated books, had little to no running water, broken furniture, classrooms buildings were beyond repair, and electricity blackouts were a common occurrence. “In boarding school, we had the same meals every day. We had to bathe with cold water in the winters if we had water. Students came to school without shoes. It was a typical third-world mission school. Those tough times make you grow up young, but we learned a lot from it,” Mhlanga said. “We had the worst learning conditions one could ever hope for but we endured. The only thing that kept us going was passion. We never gave up. I remember at times when we had blackouts, we would huddle around one candle just to be able to read our books.”

Many first-year freshman college students become homesick during their first semester away from home. Add to that being in a foreign country surrounded by cultural differences and overcoming language barriers, and it’s understandable that Mhlanga’s first semester was beyond challenging. “My first semester was so terrible I wanted to go home. Thankfully I found friends and they encouraged me to stay.”

Mhlanga earned a business degree from Harding and went on to earn his MBA as well. He also met his wife at Harding, who is originally from Zambia. Although they both originated from African countries, Mhlanga and his wife grew up with vastly diverse cultures and languages. Mhlanga said they only communicate with each other in English as it’s the only language they share in common. “When she speaks to her parents, I cannot understand her, and she does not understand me when I speak to mine,” he said with a laugh.

When Mhlanga wanted to seek the blessing of his future in-laws to marry his wife, an intricate exchange was initiated. “Culturally, I had to figure out what her parents’ expectations were and try to blend that with my culture as well,” he said.

Mhlanga said his wife has had the opportunity to meet his parents as his father travels to the United States every three to five years to report to churches providing support of mission projects he is working on in Zimbabwe, including founding a hospital and an orphanage. However, Mhlanga has yet to meet his in-laws.

After graduating from Harding, Mhlanga obtained an H-1B visa and worked as an insurance commercial manager for UAMS in Little Rock. His wife, who holds a biology degree from Harding, was accepted to the university’s pharmacy school. The couple moved back to Searcy. Mhlanga switched back to a student visa so he could apply to the registered nursing program at the University of Arkansas Community College at Batesville. He anticipates graduating this year, and his wife will complete pharmacy school in 2022. He said his ultimate goal would be to join his business and medical field knowledge to open his own medical billing company.

Mhlanga said education had always been a very important aspect of his upbringing. “Education is culturally important in Africa,” he said. “It’s a point of pride for the family to be well-educated.” His parents are both college graduates. His father earned his Ph.D. in education from Michigan State University and his mother holds a masters in biological studies from Florida State University. Mhlanga’s parents met and married in Michigan and had his sister while living in the U.S. They moved back to Zimbabwe when she was a year old. His parents are both full-time missionaries in Zimbabwe. He also has two brothers who are currently living in the U.S.

UACCB’s small campus is the perfect setting for him, Mhlanga said. “It’s a small school, but for me the smaller the better. The thing I like about UACCB overall is that the faculty and staff really do go far and beyond to help you. They want you to succeed,” he said. Speaking about the nursing program, Mhlanga said it was more of a challenge than what he expected. “I came into it thinking this would be an easy program, but it’s a tough program. The good thing is you have instructors who are willing to sit down and help you go over things you don’t understand.”

Mhlanga noted that part of the challenge for him was the language barrier. “I have to translate the material in my mind so that I can understand it. It takes me longer than a typical student to understand what the material is saying,” he said. Again, he credited the faculty for going the extra mile to help him succeed in the program. Specifically, Mhlanga mentioned the efforts of Mary Brewer and Michelle Bishop, RN nursing faculty at UACCB. “They both go out of their way to help you,” he said.

The journey to the American dream has been far from a straight, easy road to travel for Mhlanga and his wife, but he said they continue to persist and take things one step at a time. “We’ve had lots of challenges. It isn’t easy. We’ve had to adjust to the culture here, and we have immigration laws that we must abide by. It’s been difficult, but we’ve made it work,” he said. “The biggest struggle overall is trying to become American, trying to achieve the American dream. We’re just taking it one day at a time.”