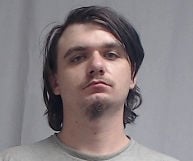 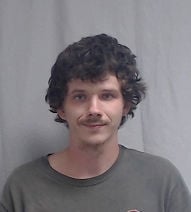 Eric Waterman, 21, and William Todd Burtfield, 21, are in custody as of Tuesday morning.

Sheriff Shawn Stephens responded to Harmon’s farm on Monday about “some of his farm equipment being damaged and some stolen.”

Harmon reported a service truck being stolen as well as a pair of tractor-trailer trucks “were attempted to be moved,” according to Stephens’ report.

Harmon reported that the tools that had been in the tool box were missing.

Stephens said he inspected a white 1997 International and noticed “the battery box had been taken apart, the drive shaft had been twisted in two, the windows busted out of both doors, and the windshield was busted.”

Stephens said he contacted Chief Deputy Aaron Moody at that point to bring some more equipment to help process the scene.

Chief Deputy Moody and Investigator Michael Moody arrived to assist in the investigation.

One of Harmon’s employees reported to Stephens that the service truck that Harmon had reported stolen “was located in a low spit stuck in the mud.”

Stephens stated in his report that he went to the field where the service truck was reportedly located and noticed that the 2001 Dodge 3500 flatbed had been “completely burned up,” according to Stephens’ report.

A GMC flatbed was also vandalized, according to Stephens.

Stephens said he also found a 1989 International tractor trailer that was “attempted to be moved and the power divider had been torn out of the truck, thus causing the rear end to be torn up and unable to operate.”

Chief Deputy Moody notified Stephens that he had made contact with Waterman at a trailer park at 200 Double Road.

After getting a detailed description of the missing tools from Harmon, Stephens and Moody arrived at the location and noticed “some of the described tools in the back of the truck” at the Double Road location.

Waterman agreed to go with Stephens and Chief Moody to the sheriff’s office.

While waiting for the tow truck, an employee of the trailer park informed Stephens that Waterman had “shown up late for work today and had been trying to give away some tools,” according to Stephens’ report.

Stephens said the employee stated the tools were on a table in the front yard of Waterman’s residence.

Stephens went to the yard at Lot 42 of the trailer park and observed “two plastic containers laying on a table in the front yard.”

Stephens said he was able to see that the boxes contained John Deere parts and there “was more items that had been described as taken.”

Chief Deputy Moody informed Stephens that he had the location of the other suspect. Contact was then made with Burtfield.

With both men agreeing to speak at the sheriff’s office, Stephens said Waterman stated that he and Burtfield “went riding around and was drinking alcohol,” traveling to Hutchinson Mountain and then to Desha.

Waterman added in his statement that the two “went into the bottoms and found the equipment sitting there.”

Waterman told authorities that Burtfield “wanted to drive the tractor-trailer truck” adding that Burtfield tried to move the truck and it tore up because Burtfield did not release the brakes.

Waterman also told county authorities that they found the Dodge 3500 and “started driving it around the field.”

When the truck got stuck in the field, Waterman said the two were “afraid their fingerprints would be found so the truck was soaked in diesel and set on fire,” adding that they got some tools from the equipment and took them and “found the other tractor-trailer truck and tried to move it.”

In Burtfield’s interview, Stephens’ report said when the two suspects arrived in the bottoms, they found the equipment and Waterman “wanted to try and drive the tractor-trailer truck.” Burtfield stated the truck tore up and would not go.

Stephens’ report also said that Burtfield told authorities they found the Dodge 3500 and Waterman got in the truck, started doing doughnuts in the field and got it stuck.

In Stephens’ report, Burtfield said Waterman “got scared about prints on the truck, put diesel on it, and set it on fire.”

Burtfield added in the interview that they found the other tractor-trailer truck and Waterman tried to drive it but “could not get it to move.”

Burtfield told Stephens “when the fire got big from the Dodge 3500, they left the bottoms.”