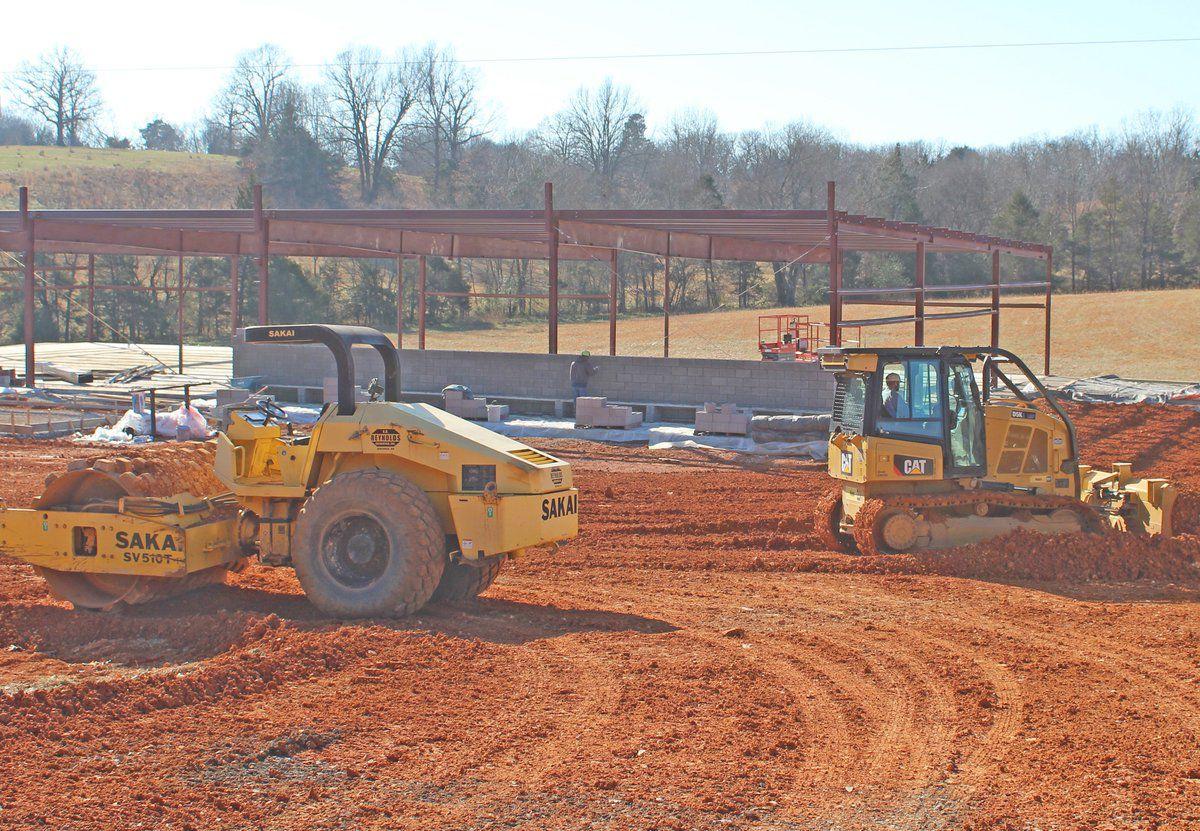 Construction is underway for the new Dollar General store south of Cushman although some residents in the area are protesting against the store. 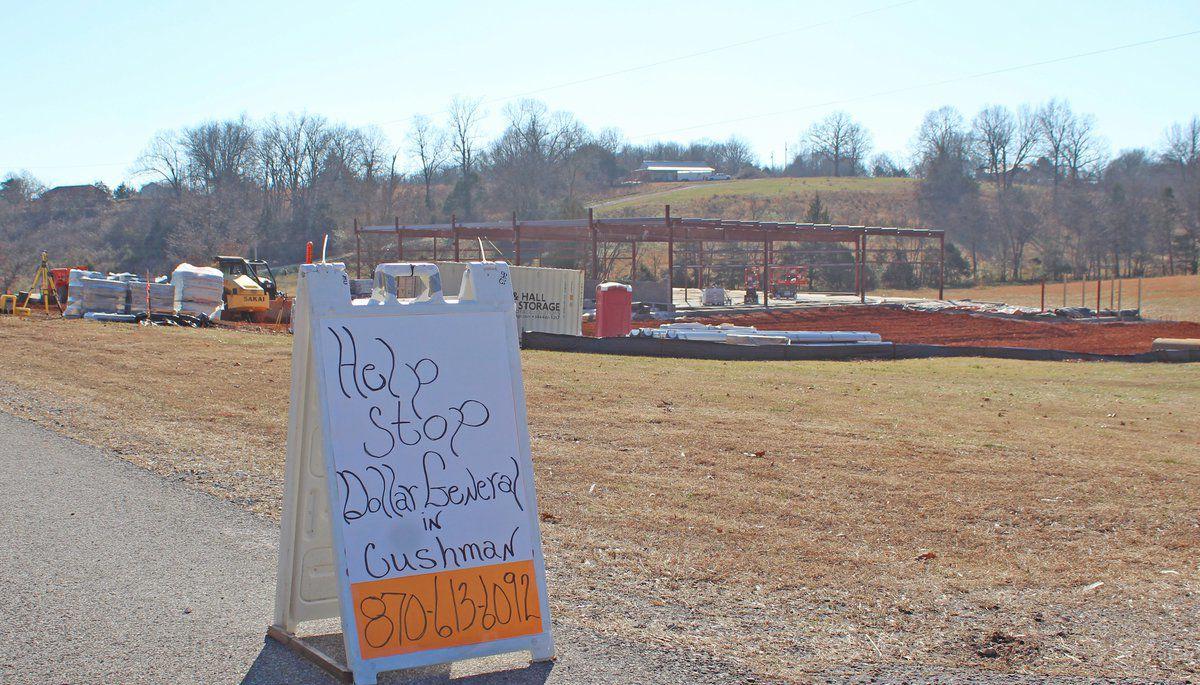 A sign made by Cushman resident Ranae Hillard protesting the construction of a new Dollar General store in the Cushman area.

Construction is underway for the new Dollar General store south of Cushman although some residents in the area are protesting against the store.

A sign made by Cushman resident Ranae Hillard protesting the construction of a new Dollar General store in the Cushman area.

Ranae Hillard has been against Dollar General moving into the Cushman city limits from day one.

"I moved to this area because I wanted to be away from city things," she stated. "If I need to go to the grocery store or the pharmacy, I choose to live out here and drive into Batesville. I do not want to see stores in this area."

Hillard claims that Dollar General stores make it easier for people with drug habits to use drugs in their bathrooms.

"I spoke with a lady who told me that when they clear out the septic tanks of these types of stores, they are filled with needles," Hillard exclaimed.

Hillard's campaign to keep the store out of the city limits isn't stopping it from happening as construction crews have hit the ground running on getting the store framed and ready for public use.

Since construction began, Hillard has stood on the main highway across from where the store is being built, holding signs and protesting.

"When I first started coming out to the site, a state police officer stopped by and told me that I had the right to be there as long as I stayed behind the white line," Hillard explained. "So, I followed the rules and did just that."

Hillard kept signs out daily, and would go to the site when she was able to until she was approached by another state police officer.

"This officer told me that I had my signs over the white line," she stated. "He also told me that he heard that I had been yelling at people and was going to arrest me."

Hillard then claimed that the officer asked for her driver's license to which she explained that it was in her car across the road. They both crossed the street and Hillard claimed the officer "shoved her" once they got closer to her vehicle.

Hillard then told the officer, "do not shove me," and claimed that "he went ballistic, grabbed me and turned me around and arrested me."

According to the police report given by Officer Michael Woodward, he responded to a call on Highway 69 at the site of the Dollar General store south of Cushman, that someone was protesting and causing potential hazardous traffic problems in the roadway.

"As I came around the curve just north of the location, I could see a woman standing over the northbound fog line waving a sign out into traffic as a vehicle was approaching," Woodward declared. "I activated my lights as I arrived on the scene and called out to dispatch. I recognized the lady as one of the protestors that I had previously met at the same location."

Woodward recalled that he and fellow Independence County Deputy Gary Franks had advised her before that she had to stay off the roadway and was to never interfere with traffic.

Woodward admits in the report that he "stayed close to her," as Hillard went to get her driver's license and as they approached her car, Hillard opened the passenger side door and Woodward "placed my hand on her shoulder."

As Hillard was going through her bag, Woodward stated in the report that "she turned and pushed against my chest and stated that she did not want me touching or pushing on her."

At this point, Hillard was placed under arrest for disorderly conduct.

"I grabbled her wrist and spun her around placing the handcuffs on her then," Woodward explained. "I then walked her back to my car and placed her in my rear seat, and then I asked her several times for her name and date of birth in which she refused to give to me."

Hillard claimed that she was hurt and may have to get an MRI due to the way she was treated throughout the arresting process.

"During the ride to the jail, I was feeling really sick," Hillard stated. "Maybe from the way the officer was driving, I'm not sure, but I fell over in the back seat and I couldn't get back up because I was handcuffed behind my back."

Hillard claimed that Woodward stopped the vehicle and "grabbed her seatbelt and jerked her back up."

Hillard also claimed that once she was at the jail, she was treated unfairly and that she didn't understand why she was placed under arrest, and was told that she was just "given a ticket."

"I was totally manhandled at the jail," Hillard stated. "I was really quite sick, and I had to take all of my clothes off and I don't even know why. They also tried to fingerprint me, and I didn't want them to do that either."

Even after the whole ordeal, Hillard is still going to protest the Dollar General from coming to Cushman, and still feels that all of this is worth it.

"The thing is, I am concerned about this little community out here," she stated. "I am worried about the quality of life that we have here in Cushman, this store has already caused so many issues and back door deals going on, I just don't feel like it is going to be a good thing to have this in our city."

I doubt if very many people shares her sentiment. Just from reading the article I concluded that the lady may have a problem by some of her statements especially the one about needles in the septic....wonder how many septic pumping's she has personally attended and went thru the mess to find needles?? does she make it a point to attend pumping's of stores??? Just a bit of an odd statement.

Sorry, there are no recent results for popular images.